Arcturus Tactical is a newcomer to the airsoft industry. However, this status hasn’t stopped it from producing some incredible AK and AR AEG replicas that impress even seasoned airsoft players. Despite the company’s excellence, it remains relatively unknown throughout the community.

Arcturus doesn’t disclose where it’s based, but by looking at its official website, we see that its guns don’t have orange tips. We can gather from this information that it’s probably not located in the U.S., where most airsoft guns come with an orange tip to identify them as non-lethal. But more on that later. In this article, we’ll also cover two of its most popular rifles.

The company’s name comes from a giant red star visible in the Northern Hemisphere. It’s also the brightest one in the constellation of Boötes. “Tactical,” meanwhile, is a common name for brands that are in the firearms and airsoft industries.

Beyond explaining that Arcturus Tactical was formed by passionate airsoft industry professionals in 2017, not too much is known about the company. In addition to the lack of orange tips on the barrels, we can also tell that it’s not U.S.-based because it relies on MOS Manufacture Inc. as its official American distributor. Retailers are also asked to contact MOS for wholesale opportunities.

But that doesn’t mean that Arcturus has no airsoft guns with orange tips. Indeed, on some airsoft retailer websites, you can also find some of its guns having orange tips, particularly those in the U.S. The practice of having more than one version of each airsoft gun is common for manufacturers located in other countries.

No matter where Arcturus is from, you can rest assured that its AEGs are excellent products. It lists quality, innovation, and the community’s needs as priorities. Arcturus Tactical also strives to innovate in all aspects of its company to satisfy airsoft players around the world.

Currently, Arcturus Tactical only makes AEG replicas of the AK and AR family of rifles. Its guns are divided into three series:

You can also get airsoft magazines for its AEGs. These are specifically made to fit its products.

The AK Series contains several models, which are all based on the AK47, AK74, AK12, and other similar Russian weapons. The available weapons are:

The AK04, AK12, CT02, and most others are full-sized assault rifles. The AK01, AK05, and AK06 are inspired by the AKS-74U, a short-barreled rifle issued to tank crews and special forces. You can almost consider them rifle-caliber submachine guns.

On the other hand, the AK12K is a shorter version of the standard AK12 that Russian soldiers carry today.

While the website lists only three AR AEGs, other stores carry more. We’ll include all available guns on our list. All models in the AR Series are based on the AR15 designed by Eugene Stoner and, by extension, the M16 rifle and M4 carbine.

These weapons all have full-metal receivers, so you can expect them to weigh extra and endure more punishment on the battlefield. Barrel length depends on the model, so you can pick between short-barreled and full-size guns depending on your preferences.

The Lite Series consists of several AEGs that are also based on the AR platform. However, they mainly differ in the receiver material. These weapons have steel-insert polymer receivers instead of full-metal ones.

Otherwise, there aren’t too many differences between these guns and those from the AR series, including:

The Lite Series is an excellent choice for users who want a lighter weapon.

There are three magazines you can get from Arcturus Tactical. They are:

The K02 magazine is designed for AK74-based guns, meaning you can’t use them with the AK12 and AK12K. You’ll need to get the TS-BK magazine for these two instead.

For all others, they use the R04 magazine. This one resembles a modern AR15 magazine and has holes for counting ammunition.

Arcturus Tactical magazines have a special function that allows them to have various capacities. You can load them with only 30 BBs or 135 BBs. The former number is more realistic and works for tactical training. 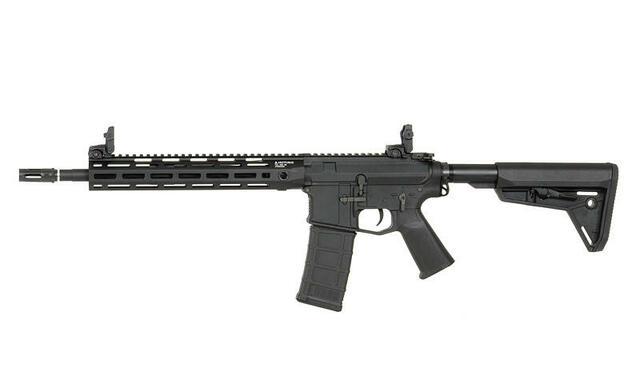 As part of Arcturus Tactical’s Lite Series, the NY03CB has a polymer receiver reinforced with steel inserts. It’s not entirely plastic, so you still have some protection for the Version Two gearbox and other components. And despite its lower price point, you’ll be surprised at what features it has.

The outer barrel is made of Type III hard-anodized aluminum, CNC-machined precisely. The inner barrel is a QPQ-Processed PCP Grade Extreme Precision Steel barrel. Its bore diameter is 6.02mm, which is highly accurate and increases muzzle velocity.

A Type III Hard Anodized Aluminum handguard covers most of the barrel, and you get a seamless top Picatinny rail for any sights you prefer. The others are M-LOK slots, including some diagonal points for extra mounting options. The upper receiver rail and top handguard rail allow for lots of room.

The selector, magazine release, and bolt release are ambidextrous, so you won’t need to get aftermarket upgrades like some AEGs. The charging handle is made of steel and can be used by both hands.

You also get a steel receiver plate for durability. Unlike many companies, Arcturus Tactical built its Lite Series weapons to be damage resistant.

The forward assist is functional and, like the selector and other components, is made of die-cast zinc. This component helps the bolt go forward in case of jams, but most M4 AEGs only have a decorative one that doesn’t function.

The M-stock that comes with the NY03CB is lighter than a traditional crane stock but still comfortable to shoulder. The material used to construct it is a nylon fiber-reinforced polymer.

Internally, the gun is a technological masterpiece. The Version Two gearbox is connected to a microswitch trigger, and this trigger is comparable to some brands’ ETUs. For the best performance, the motor spins at 19,000 RPM.

You also have a drum-type large metal hop-up for BB flight path adjustments. With some testing, you can adjust your weapon according to your preferred ammunition.

The piston is a nylon fiber reinforced polymer, but it has steel teeth. However, for maximum FPS, the cylinder is entirely stainless steel. The spring guide is made of aluminum and has steel bearings, further increasing muzzle velocity.

The included quick-spring change system lets you adapt to local venue rules and keep others safe from injury.

Compared to the NY03CB, the NY02CQ is closer in appearance to the original M4 carbine. However, many of the features are the same.

The outer anodized Type III barrel is CNC-machined for precise dimensions, while the inner barrel is made of steel and has the same 6.02mm bore diameter. For reference, most sellers offer 6.03mm inner barrels, and anything lower is less common.

A similar M-LOK handguard is outfitted on the NY02CQ, and you also get diagonal slots. This arrangement is perfect for diagonally-mounted iron sights or lasers. The top Picatinny rail is seamlessly linked to the upper receiver’s rail, allowing users to mount optics at any point.

The receiver is made of nylon reinforced polymer but has a steel receiver plate. Other steel inserts in both the upper and lower receivers increase resistance to cracking and impact damage. You’ll find this gun slightly heavier than other polymer guns as a result.

Many small working parts like the fire selector, magazine release, and bolt release are die-cast zinc and ambidextrous. You get a stainless steel charging handle, as it’s used more often and needs extra protection.

An A-stock comes with the NY02CQ instead of the M-stock. This one is just like a standard M4 crane stock, so it’s a familiar sight for players.

Internally, everything is similar to that of the NY03CB. You get a Version Two gearbox, adjustable drum-type hop-up, and microswitch trigger. These are premium components usually found on costlier AEGs.

Adhering to a venue’s FPS rules is essential, so Arcturus Tactical designed a quick-change system for convenience. You can make your gun compliant very quickly and without complete disassembly.

A Brand You Can’t Ignore

Arcturus Tactical is an airsoft manufacturer that punches above its weight class. While keeping prices reasonable, Arcturus builds guns with incredible features. They’re pretty realistic and can be used for self-defense, law enforcement, and military training.

Even if the included parts are quite sturdy and reliable, they are also upgradeable. There are also many models to pick from, especially with the AR Series. The company’s AK Series is also nothing to scoff at.

Without breaking the bank, players of all levels can be satisfied with Arcturus Tactical’s AEGs. The company isn’t very famous, but more players will find out about it as time passes.