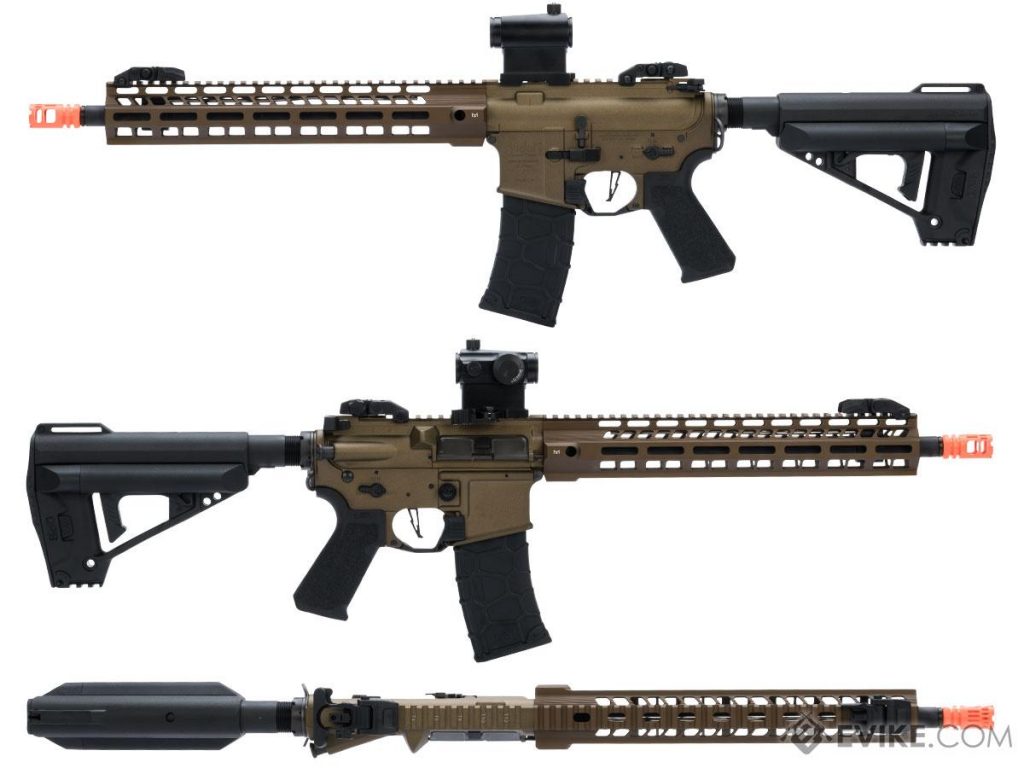 Product Description: The VFC Avalon Saber Generation 2 VR16 is a higher-end AEG airsoft rifle made under both VFC and Elite Force labels. Using an M-LOK rail format and the M4 rifle platform, this gun has a built-in MOSFET, ambidextrous fire selector, and 120 round mid-capacity Tokyo Marui-compatible M4 magazine.

VFC’s second generation Avalon Saber has some of the highest quality and advanced internals of any stock gun, and is an absolute joy to shoot. It’s snappy, powerful, and deadly accurate, with tight groupings on the range in mid-to-long range. VFC nearly thought of everything for the externals too, except for a few potential issues with gaps between the upper/lower receiver or receiver/stock.

Hey guys, it’s ya boi Airsoft Gun Guy out here reviewing the Elite Force / VFC Avalon Saber Gen 2 Full Metal VR16 M4 Carbine M-LOK AEG Rifle. Whew! Now that my fingers are tired just typing all of that, let’s get into the nitty gritty of one of the most accurate, snappy, and high rate of fire tactical laser beams I have had the privilege of reviewing yet.

The VFC Avalon Saber Gen 2 (rebranded under the Elite Force brand in some countries including the United States), is a whole lotta metal, and that’s one of the many things I love about this gun. Aside from the stock, flip-up sights, pistol grip and trigger housing, just about every inch of this baby is high-quality lightweight aluminum. The Avalon Saber has the externals, internals, and performance that you would expect from an AEG that’s twice the price, which makes this gun one of the best stock M4 AEGs for the price point.

“Amazing! Exquisite! Perfect!” is a damn good description of how this beast shoots.

It shoots like a god damned unholy laser beam of death, that’s how it shoots. For our field test, I used an 11.1 LiPro battery and 0.2g BBs (I know, I know, why does everyone always use 0.2g BBs for the field test?! To shot maximum pew pew power of course). The first thing that I noticed was that there were no double-shots, dry fires, or multi-shot cycling issues which was a relief as there was a big bold sticker on the box that warned of that possibility (and a carry over from the Gen 1 Avalon Sabers). The semi-automatic trigger pull (with the lightning bolt trigger) was great. It felt good, and I really like the light yet solid lightning-bolt trigger that is a trademark of the Avalon, and it was consistent. In automatic mode, this thing was just an absolute laser beam (I know, I say that a lot, but this is for real a laser beam of an airsoft gun). With targets even 100 feet out the BBs fired straight as an arrow with 0.2, 0.25, and 0.28g BBs in a tight grouping. I’d like to think I’m a great shot, but this gun definitely helped me out. The rate of fire was outstanding. The VFC Avalon Saber Gen 2 is just hands down one of the best airsoft guns in terms of shooting I’ve ever seen.

Now we’ll get into the play-by-play of the gun analysis.

The internals of the Avalon Saber Gen 2 are outstanding. Integrated MOSFET, high-torque neo-magnet motor, quick-change spring, 8mm bearing bushings, and a VFC ECS mechbox that looks like it came out of the future. See for yourself:

There is a mock bolt-catch for the rotary-style hop-up which feels realistic and badass to use. The internals for this gun are extremely impressive for a stock, base gun. Despite the occasional flakiness of VFC’s QC, the internals are definitely an area you have absolutely nothing to worry about. They’ve got you covered for the “high-tech, high-quality internals for a stock gun” department. I wouldn’t even upgrade any of the internals (except maybe a custom MOSFET, but it really doesn’t need it). Everything inside the VFC Avalon Saber Gen 2 is on point, stock.

The rifle has plastic flip-up sights, adjustable apertures in the back, and height adjustment in the front. The receiver is nice, solid, and lightweight like the rest of the gun, with a badass Avalon logo on the side, which reminds me a bit of the Wu-Tang logo.

The trigger guard is made of polymer with a QRS trigger rest, one of the small touches that increase the comfort and quality of life on VFC’s Avalon masterpiece. I never knew how much I needed a trigger rest until I had a trigger rest. It really takes the strain out of your trigger finger (if you have your finger off the trigger until you shoot like you’re supposed to, like I do).

The QRS 120-round mid-cap waffle textured magazines look and feel awesome. The pistol grip is also QRS with a solid bottom and allen screw slot for adjustment.

I have a few small complaints about the externals. And then a few cons that I was a little more concerned about.

I don’t like the ambidextrous magazine release. It’s too far away from the trigger and trigger guard. This wasn’t an issue for me as I have really long fingers, but I kept feeling like I was going to miss it when I reached it. The ambidextrous mag release is a strange circular button shape which I didn’t like. The magazines also don’t fall out of the mag housing when the mag release is pushed, which when you get used to it is probably a good thing, but I was not used to it. It’s nice to not have to worry about going back to find your mags after you’re tagged or after the game is over, but it threw me for a loop.

The Gen 2 VFC Avalon Sabers have a lot of the potential quality control (QC) issues that VFC claimed would not be a problem in the Gen 2’s that carried over from the Gen 1’s. The first and most glaring is the potential for gaps between the upper and lower receivers. The gun I used for fire testing did not have this issue, but I have heard this complaint from 3 or 4 other players that own this airsoft rifle. This can add a bit of play to the gun (which is a no-no for this price, and if your rifle does have this gap, you should return it immediately).

My biggest issue with the gun was the play in the stock. For a gun that costs somewhere in the mid-to-high 300s, there should be no play in the stock, at all, ever. I had to add a piece of Velcro where the stock meets the receiver. This is either not a QC issue because it happens so frequently, or it is and they just don’t check for this issue in the QC process. This is my single biggest gripe with the gun, and although it’s a quick and easy fix, it shouldn’t need to be done.

The VFC Avalon Saber Generation 2 model is an accurate, lightweight, snappy gun that shoots like a laser beam, out of the box. It’s incredibly accurate and incredibly powerful, and if you’re upgrading from something like a G&G, KWA, a CYMA, or an Amoeba, you’re going to immediately see your game and accuracy rise to a new level. And that’s the main reason why we spend money on airsoft guns, right? The internals look like they have been upgraded before you even received the gun, but those are just quality VFC Avalon internals for you.

The externals are also on point, feature-wise and construction wise. The rifle is 99% fully metal aluminum. But there is also the potential for a gap and play between the upper and lower receiver, and a nearly guaranteed chance of a gap between your stock and receiver.

The internals look too good for a gun of this price. The shooting is god-like. The externals are great, but also have the potential for play and gaps that should not exist on a gun of this price. If you are looking for a gun upgrade, and you want a rifle that is deadly accurate and doesn’t need any upgrade for its internals, and you’re willing to chance the possible QC issues like gaps between upper and lower receivers or between receiver and stock, then buy this rifle yesterday. If the possible QC issues do bother you, and you want a gun that “just works” and you don’t want to have to fix anything yourself or potentially have to send the rifle back in, then maybe something like a Krytac Trident MK2 or an ASG CZ Scorpion Evo 3 A1 are more your cup of tea.