Nerf guns are a fun way to promote physical activity and healthy competition between friends. If you’re planning on giving a present to someone who loves action and fun but isn’t sure what to buy, why not consider a Nerf gun as a gift? In this article, we’ll list the best Nerf guns available in the market, along with a few tips on how to play with them safely.

What Are Nerf Guns?

Nerf guns, from Hasbro, are toy weapons that fire safe foam ammunition. The name is now so iconic that it’s become a blanket term for any foam-based weapon, not just guns. These toys are rated safe for children and young adults and have inspired a community of fans to create events based on Nerf weapons.

Listed below are the five best-selling Nerf guns on the market, along with specifications related to each. 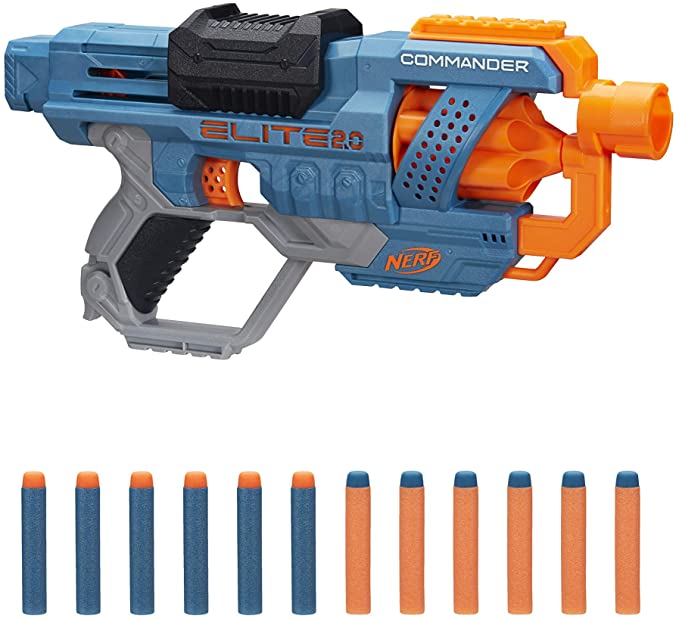 The NERF Elite 2.0 Commander RD-6 Blaster is arguably one of the best Nerf guns on the market. If you’re looking for a Nerf gun to crank up your gameplay, then this is definitely a great choice.

This customizable Nerf pistol can shoot darts at a distance of 90 feet, giving you an advantage when it comes to engagements. The six-dart drum magazine can fire darts individually or in rapid fire via the slam-fire mechanism – you can unload darts quickly by holding down the trigger. The gun itself is a pump action and requires no batteries to operate.

Three Picatinny rails are located on various areas of the gun so that you can attach barrel or stock extensions as needed. The set itself comes with 12 darts for a full magazine and one full reload. This toy is rated for children 8 years and up. 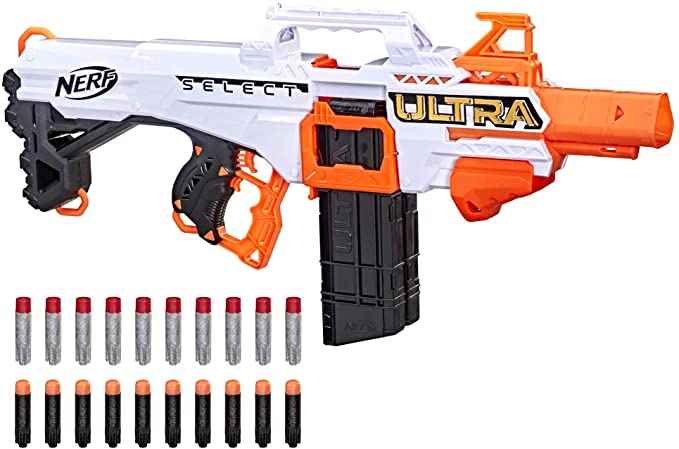 The Nerf Ultra Pharaoh Blaster lets you dominate the battlefield from a comfortable distance with this effective long-range Nerf rifle.

This bolt action Nerf blaster can easily strike opponents 120 feet away and makes aiming easy with its telescopic sight. The 10-dart removable clip operates via bolt action reload and firing. If you buy extra clips, they can be kept close via the stock clip storage for convenient reloading.

The special edition gold ultra darts included with the package are made with Nerf’s patented Aerofin technology. This gives your ammunition both increased distance and accuracy, making it easier to effectively neutralize your enemies. 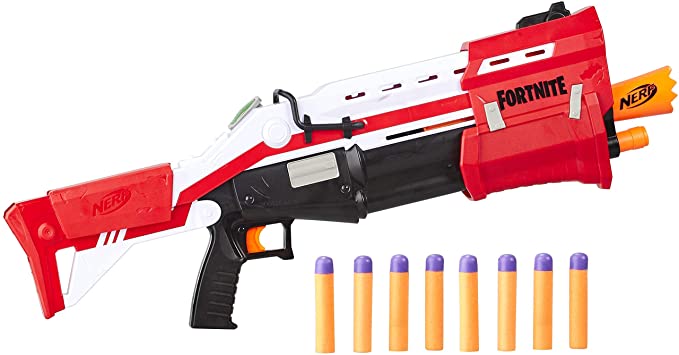 If you’re looking for the most iconic Nerf gun around, then the Nerf Fortnite TS Blaster is a cut above the rest. Based on a weapon in the game Fortnite, the TS Blaster brings the popular battle-royalé to real life.

This pump-action blaster holds four darts which can be quickly fired one after another. The stock can hold four additional darts in storage for a full reload when you empty the clip. The set comes with eight official Nerf mega darts.

This Nerf blaster is hand powered, requires no batteries to operate, and is rated for children eight years and up.

Become a legitimate threat on the battlefield with the REKT OPFOUR Series Co2 Dart Rifle. Shoot further and more accurately with this gas-powered Nerf blaster.

Each dart of the 12-round magazine can be loaded by cocking the foregrip. Because this blaster doesn’t use springs, ammunition can be loaded and fired faster than ordinary Nerf guns. Picatinny rails on the handguard provide users with options to accessorize this blaster as they see fit.

The two Co2 cartridges that power the REKT OPFOUR are stored within the stock and can be easily removed for refills.

Below are a few honorable mentions for those who want competitive blasters that won’t break their budget. 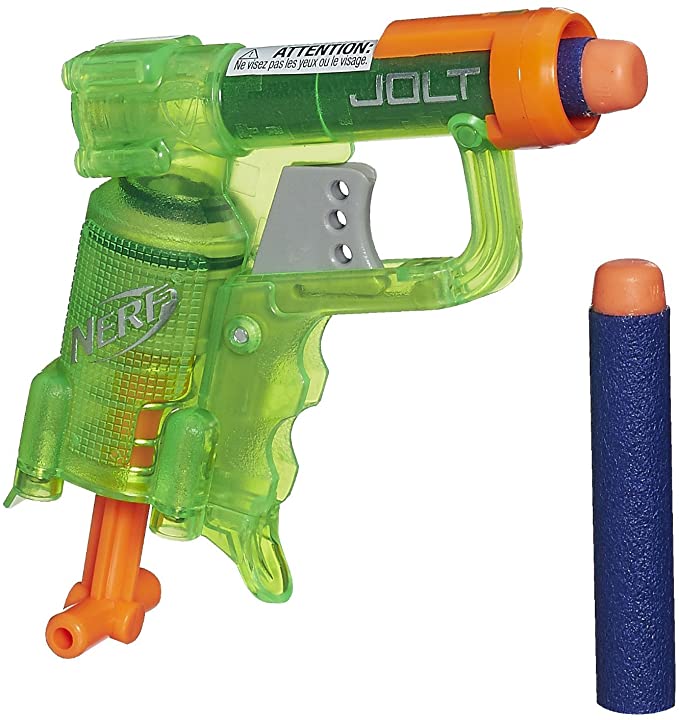 If you’re looking for an affordable single-shot Nerf gun, then the NERF N-Strike Elite is the gun for you. This blaster proves that great things can come in small packages.

The Nerf N-Strike Elite offers a surprisingly accurate blaster at a very affordable price. This is perfect as a sidearm, or for a casual match with friends.

At its very low price, this Nerf blaster is perfect for introducing newcomers to the hobby.

If what you want is a balance between price and performance, then the NERF Fortnite AR-L Elite Dart Blaster is a great choice. Modeled after one of the guns in the popular video game, this is a terrific mid-tier blaster for beginners in the hobby.

This battery-powered Nerf rifle fires one dart per pull of the trigger. The clip holds up to 10 darts with 10 extra darts included to allow for a full reload. The front and rear sights can be flipped up for better aiming. This moderately priced rifle is great for those looking for a relatively inexpensive blaster while remaining competitive.

Although Nerf guns are designed with the user’s in mind, there are a few tips you should consider to ensure safety.

Nerf darts are made of soft foam, but a bad hit to the eye can still cause damage. Always wear safety goggles when playing with Nerf blasters and avoid aiming for your opponent’s face when playing. The last thing you want during playtime is an unexpected trip to the emergency room.

Trigger discipline is something you practice even when you’re using Nerf guns. Keeping your fingers outside the trigger guard ensures that you don’t fire your darts prematurely. For blasters that need to be cocked for each shot, this can be the difference between winning and losing. Make sure you’re ready to fire before putting your hands on the trigger.

Foam darts may not be deadly, but they can still hurt younger kids and toddlers. Never leave a loaded Nerf blaster laying around within the reach of young children. Remove the darts from the blaster when you’re not using it and store it in a safe place. Not only will this avoid hurting others, but it will also help your blaster last longer.

When playing Nerf wars, make sure to set boundaries within an enclosed area. Make the streets off-limits, especially ones where there’s constant traffic. It’s far too easy to get distracted and not notice vehicles coming at you. Stay safe and keep the game within the yard.

Never shoot at anyone or anything that isn’t involved in your game. Some people may shrug off a foam dart, but others may not be so understanding. Never attempt to surprise anyone while holding a blaster unless they know you’re only playing. This is important, especially if you live in a state that allows open carry of actual firearms. Never place yourself in a situation where others might mistake you for holding a real gun.

Nerf blasters are a fun way to get some exercise and get your competitive juices flowing. So long as you observe proper safety precautions, Nerf wars can be one of the most enjoyable activities in which you can participate. Get yourself one of these best Nerf Guns for 2022 and experience the excitement for yourself.