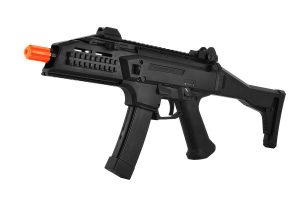 Product Description: The ASG CZ Scorpion EVO 3 A1 is straight up one of the best airsoft guns ever made. I’ve played a lot of sports, and this gun is the most universally loved and respected product out of any sports that I’ve ever seen. This gun has so few cons that we had to switch up our typical review formatting to write about it.

The price tag can seem hefty (depending where you buy), but this gun scored a perfect 5/5 for value for us. While this gun is a little bit pricier for newer players, every cent of this gun’s price tag pays off. ASG made a hit with the Scorpion EVO 3 A1 because they ignored the bells and whistles and put all of the focus on performance, reliability, accuracy and features.

The ASG CZ Scorpion EVO 3 A1 is one of those guns that is nearly universally loved by experienced players, both indoor and outdoor players alike. With nearly every dollar of the gun’s price tag put

into performance, and features, complete with ASCU MOSFET, ASHU no-dryfire hop-up, and ambidextrous fire mod switch, this rifle is just a beast. I asked an indoor player about the cons of this gun recently. His response was, “what cons?”

Let’s get one thing out of the way though: The ASG CZ Scorpion Evo is not known for its looks – it isn’t a gorgeous gun. But there is not a single airsoft player I have met that doesn’t respect this rifle. Players buy this gun to perform, not to look flashy, and it is clear that ASG put the money that would have gone into looks and put it into the rifle’s power and internals. Ask any experienced airsoft player about the Scorpion Evo 3 A1 and they will tell you it’s a sleeper gun, especially when the internals, scope, and magazines have been modified.

The ASG CZ Scorpion is a lethal, accurate, godly, high-power in a small-package, kick-ass gun. Players have hit snipers with this gun, and the Scorpion EVO 3 A1 is technically an SMG. It’s unique and unmistakable on the field. Players love it because it’s a no-frills, failsafe rifle that will hit what you’re aiming at, indoor or outdoor. It’s durable and it’s reliable, and the Scorpion EVO’s trigger response and ability for snap aiming make it devastating when placed in the right hands.

The ASG CZ Scorpion EVO 3 A1 features an ASCU MOSFET system, which stabilizes your rate of fire and preserves the contacts inside the rifle. When combined with the ASHU (Airsoft Systems Hop-Up), it is nearly impossible to get this gun to dry-fire, and the rate of fire couldn’t be smoother and more consistent. The gun is very similar to its firearm equivalent with the bolt stop function, weight, and lack of dry firing. The gun also features ambidextrous fire mode controls and a magazine ejection that is quick and easy. The EVO Scorpion feels well-balanced with a build that is study but not too heavy, making it maneuverable for CQB play. 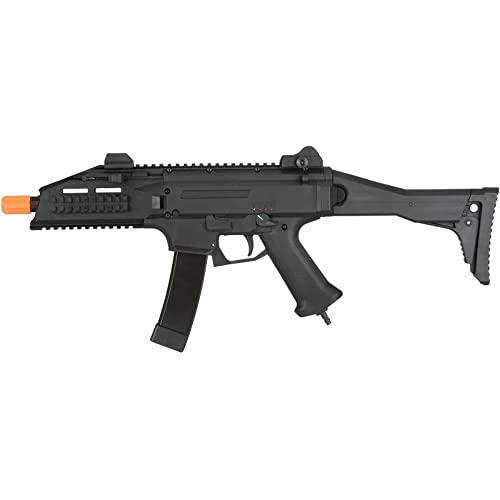 There’s not many cons in this gun. In fact, we really had to reach for our “cons” section for the ASG CZ Scorpion EVO 3 A1.

The ASG CZ Scorpion EVO 3 A1 AEG has a lot of proprietary parts. The body, gearbox shell, and magazine are unique, meaning that the gun is not Tokyo Marui compatible and it will require ASG Scorpion EVO replacement parts. Some players have complained about the battery space being relatively small and cramped, while other players roll their eyes when they hear this complaint.

As we said before, the gun is not flashy or sleek, although this is a matter of opinion. It is not Krytac KRISS Vector, but a lot of players prefer it that way (and prefer the CZ Scorpion EVO 3 altogether).

The magazine capacities are somewhat low at 75 rounds, but these can be upgraded to high-cap 375 round magazines that cost about $38 each.

If you have a $400 budget for an airsoft gun, and prefer performance over prettiness, get this gun, like, yesterday. Never before in my airsoft experience have I seen a gun that is so universally respected across the sport and industry. This gun is godly and will not fail you. It will hit what you aim at, won’t break, won’t lock up, and won’t dry fire. There are not many airsoft guns that can say as much.

Seriously, if you can afford it, get this gun. If you don’t believe us, head over to reddit.com/r/airsoft and you will see ranting and raving about this gun in a subreddit that rarely agrees on anything.