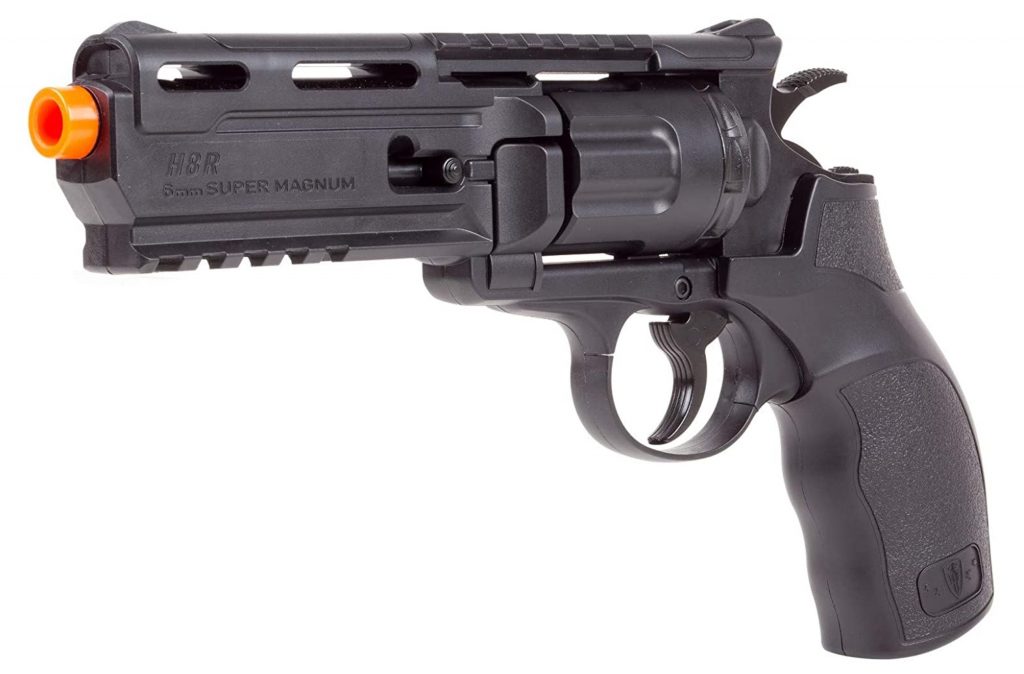 Product Description: The makers of the H8R (Hater) Revolver have improved upon the previous model and made it more compatible with current airsoft trends. With 1 Joule of power (effectively 0.9 Joules) and a sturdy build, this revolver is customizable and a great addition to your airsoft arsenal. The futuristic design and improved long-range accuracy of this model over its predecessor makes it a worthwhile upgrade for any preexisting H8R fan.

The Elite Force H8R Gen 2 improves upon the original by adding a more futuristic feel to the gun. With better visuals and keeping to the same sturdy, durable build, this is a reliable sidearm for the field. Unlike other revolvers, the H8R comes with a 10 BB capacity rounded magazine and four spares to replace on the go. All of which gives it a considerable boost in usability in short-range skirmishes. Adding the fiber-optic sights and the adjustable hop-up allows the H8R to have a much better long-range accuracy over its predecessor, making it a well-balanced sidearm. Overall, if you’re looking for a reliable close-to-mid-range weapon that’s excellent to use and attractive, the Elite Force Hater won’t disappoint.

Great mid-range accuracy with the adjustable hop-up; grip contains the Allen key to slot the gas canister in; futuristic look and feel of the pistol; dependable sidearm for skirmishes; 10 round magazine that can be easily switched out, four spare magazines.

The internals can get faulty with incorrect hop-up adjustment and incorrect BB sizes; lighter BBs are terrible at longer range; increased price tag compared to the original; shots can hook left on some pistols.

The Elite Force H8R (or Hater) Gen 2 directly improves their previous H8R revolver model. While there’s no noticeable improvement in the build quality, there wasn’t a real need to improve the sturdiness of an already impressive pistol for airsoft skirmishes.

The revolver’s externals evoke a distinctly futuristic feel reminiscent of sci-fi games. Clearly, the makers wanted to separate this gun from replicas of existing models as much as possible. The only difference here from the original is that the new version has grey detailing on the reload button, hammer, and the trigger, which makes it less dull to look at for sure.

The main advantage of the Hater over other airsoft revolvers is its excellent carrying capacity. The rounded OREO-shaped magazine holds 10 BBs, can be easily refilled, and takes very little time to replace in the field, especially compared to standard revolvers. As an added bonus, the Hater comes with four additional magazines, allowing you to carry up to 50 combat-ready bullets straight out of the box (provided you fill the magazines up, of course).

What separates the Gen 2 from its predecessor is the addition of an adjustable hop-up. Turning the provided tool key into the small hole on the top of the revolver adjusts its range. This allows the Hater to shoot at a distance of 100 feet comfortably. Let’s compare that to Gen 1, which already experienced a significant falloff at anything over 50 feet. The new iteration is a more well-rounded sidearm for open fields due to its programmable range and excellent performance in its class.

The green plastic fiber optics iron sights adds to the revolver’s appeal and helps you line up long-range shots, further adding to this pistol’s capabilities.

If you want to customize your airsoft pistol, the Hater comes with two 22mm Picatinny rails, one on the top and the other on the bottom of barrel, allowing you to put your favorite targeting accessories on it.

An additional benefit of the Hater that can be often overlooked is the hidden Allen key in the grip. By taking the Allen key with the gun at all times, you can ensure that you’re always ready for airsoft action.

The shots of the revolver are generally precise and uniform. A full Co2 canister will allow for about 120 firings before the power output becomes too low for comfort. The max muzzle velocity of the gun reaches about 350 FPS, averaging out to 330 FPS across the entire canister as you slowly empty it.

When it comes to ammo, if you prefer mid-to-longer range skirmishes, we’d recommend using .23 or .25 BBs. The heavier-than-standard ammunition will perform better at longer range.

The revolver is pretty easy-to-use, and the safety at the back of the hammer prevents any unintended shots. The heftiness of the gun adds to the genuine feel of firing during an airsoft match. The gun is not too heavy to impede on aiming and skirmishing during a game, therefore, the Hater won’t slow you down.

Overall, the Hater is one of the most reliable airsoft revolvers you’ll ever get your hands on, and the Gen 2 makes leaps in improving an already great design. If you’re considering upgrading your airsoft arsenal with a dependable mid-range weapon that has plenty of oomph, look no further than this Elite Force revolver.

The previous version of the Hater is already an accessible revolver for any airsoft enthusiast, and the Gen 2 makes excellent improvements to the versatility of the gun.

The sturdy build will withstand heavy use, and you can easily get years of action from this gun with no significant issues. The weight of the revolver feels very well balanced. If the gun were lighter, it would feel more like a toy, and if it were heavier, you’d have a much harder time using it in quick in-and-out skirmishes.

The improvements to the gun’s upper range are massive. With the adjustable hop-up, you can line up shots from over 100 feet away with ease, making the Hater one of the most versatile airsoft revolvers available. Its performance and range can differ significantly if you’re using it in a CQB environment or if you’re out in the open. However, in both of these situations, you can adapt the gun to perform its best and deliver easy takedowns.

The metallic outside, coupled with the Picatinny rails allows you to put a wide variety of attachments on the Hater, letting you customize it according to your needs and preferences. With enough tinkering, no two Haters will be alike.

We’re also impressed with the addition of the Allen key inside the grip of the revolver. This ensures that you won’t leave one of the most essential tools at home.

The added magazine size over the average revolver, with the addition of not one, but four additional magazines out of the box, allows you to carry a whopping 50 BBs to outperform the opposition.

Overall, its great price point, customization options, range adjustments, and incredible magazine capacity for a revolver, makes the Hater a dependable airsoft gun that will get you far on the battlefield. 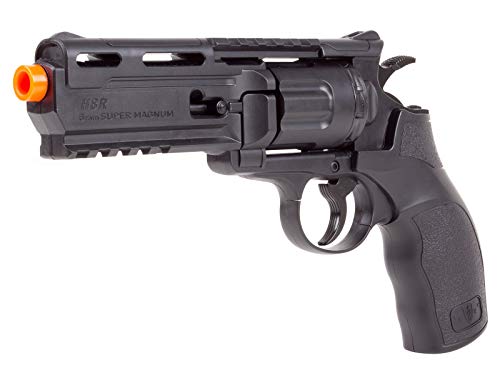 There are not many disadvantages when it comes to an action-packed piece like the Elite Force H8R Gen 2.

One key complaint we’ve received is that some guns tend to hook left straight out of the package, an issue that seems to have more to do with manufacturing defects than actual faults in the gun design. If you experience your revolver shooting to the side, try to get a replacement, as you really can’t perform well with a defective gun.

Additionally, we recommend you don’t use the stock 0.20g BBs with this revolver, as they are primarily for a shorter-range weapon. We got the best results with .23g or .25g BBs instead, as these tend to perform much better for the medium range this revolver can achieve.

The plastic cylinder magazines will eventually wear out as they grind against the gun’s mechanism and metal insides. You’re given five magazines in the box for a reason. They are also available to purchase separately, but you still want to check up on them from time to time if you use your Hater extensively.

Word on the Field

Most prominent reviewers and airsoft experts agree that the generation 2 Hater is a terrific airsoft revolver, and is made for both beginner and expert alike. With its sturdy build, it can withstand quite a lot of use. We’ve seen overwhelmingly positive support for this gun, and we’re sure it will do you good as well.

The Elite Force H8R Gen 2 is a decently affordable, robust, reliable, and versatile revolver that is ready for years of handling by an airsofter. If you’re new to the field, it will prove to be a valuable sidearm in your airsoft fights and definitely won’t disappoint you. On the other hand, if you’re an expert, you might just be surprised by the customization and utility this little revolver can bring to a gunfight.