G&G Armament was an airsoft gun, tactical equipment, and action figure dealer established in Taiwan. Since 1986, the company has been working with these realistic replicas, though it only started manufacturing and selling them in 2004. After that, the company would only experience rapid growth.

The first milestone was the patented pneumatic blowback system, which G&G registered in multiple countries. This system formed the basis of its GBB airsoft guns.

Today, G&G Armament still manufactures high-quality airsoft products, relying on precise CNC machining to make them realistic. Unlike some manufacturers, they insist that all parts of these guns be made in Taiwan. Fortunately, the brand has two factories to keep up with the demand.

Airsoft guns aren’t the only products G&G sells. The company also manufactures accessories, ranging from muzzle devices to gearboxes. Therefore, you can always upgrade your G&G weapon with compatible parts made by the same company.

Since many excellent G&G airsoft copies are sold on the market, we gathered five of the best ones here. These are incredibly realistic products that you can rely on no matter the airsoft arena. Read on to find out what each of them delivers. 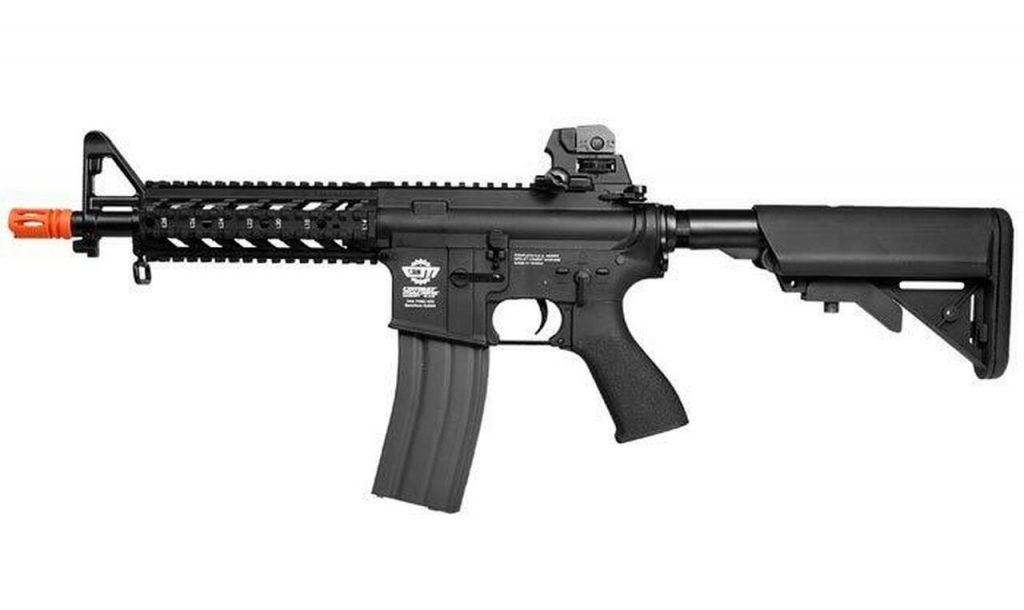 This gun is G&G’s take on the short-barrel AR-15 carbine model, a weapon slightly shorter than the typical M4 carbine. While the latter is a fine weapon, it can sometimes be too unwieldy for close-quarters situations. It’s a powerful tool for clearing spaces for airsoft players who prefer a CQC-focused playstyle.

The upper and lower receivers are high-quality polymers for durability and reduced weight. That said, the barrel is made entirely of metal for accuracy. This combination helps players aim lightning-fast.

A quad RIS handguard measuring 7 inches comes with this gun, and the top rail is seamlessly linked to the upper receiver rail. All four will accept standard Picatinny accessories without much effort. There’s a detachable rear iron sight by default.

Performance is increased thanks to the full-metal Version 2 gearbox with a high-torque motor. It also accepts aftermarket upgrades instantly. You can then tune your weapon exactly how you like it.

If the venue is full of tight corners, you can shorten the rifle even further with the adjustable crane stock. Otherwise, it’s the perfect part for letting users of all sizes shoot this airsoft carbine. 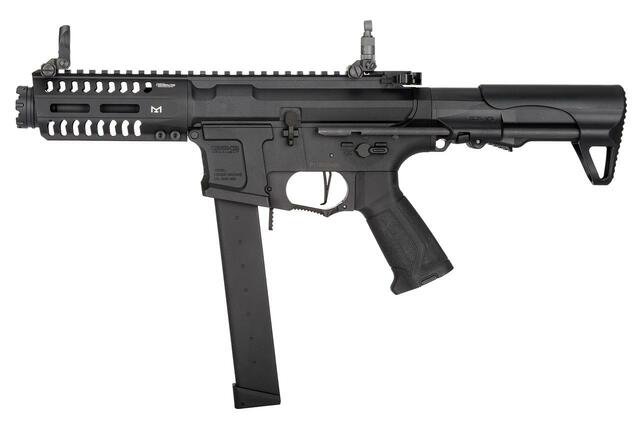 What happens when you chamber an M4 carbine in 9mm Parabellum? You get a pistol-caliber rifle, and this G&G ARP9 is an airsoft replica of this design. Of course, this one fires standard 6mm BBs like its other products.

As this carbine follows the philosophy of a pistol-caliber rifle, it has a shorter barrel and stock. It’s more of an SMG and PDW so that you can treat it as a CQC weapon. The polymer construction makes it incredibly light and portable.

The short barrel necessitates a shorter handguard, though this one uses M-LOK rails instead for the bottom and side rails. You can attach lasers and grips to these rails. The top Picatinny rail is seamless and will readily accept red dot sights and similar equipment.

A PDW-style retractable stock is provided for shouldering and aiming, though it also houses the battery. This already compact carbine is even more practical in tiny spaces, as it won’t snag on objects or your gear.

You get G&G’s Version metal gearbox for maximum performance. However, feel free to upgrade it for better results.

If the standard black model is too dull for you, there are other color schemes you can choose from.

The designated marksman’s role is a special one that falls between regular infantryman and sniper. This soldier is usually given a mid-range to a long-range rifle with a magnified scope. A designated marksman rifle like this one from G&G adequately echoes the role in an airsoft format.

Since the rifle is meant to hit targets farther away from mid-range, G&G equipped it with a longer barrel. The company also added a longer handguard to match, and fans will rejoice over this particular example, which has Keymod slots. It’s also a free-floating design that helps increase accuracy.

The whole receiver is lightweight and easy to carry around because it’s made of nylon fiber polymer.

G&B further improved trigger response with a MOSFET. It adds a three-round burst mode you can disable without dismantling the weapon. Otherwise, the standard firing modes are all intact.

The magwell is also modified for ergonomics reasons, as some operators prefer to grip it instead of the handguard.

Lastly, the muzzle device is patterned after that on the SCAR. Additionally, it can accept mock suppressors for an extra coolness factor. 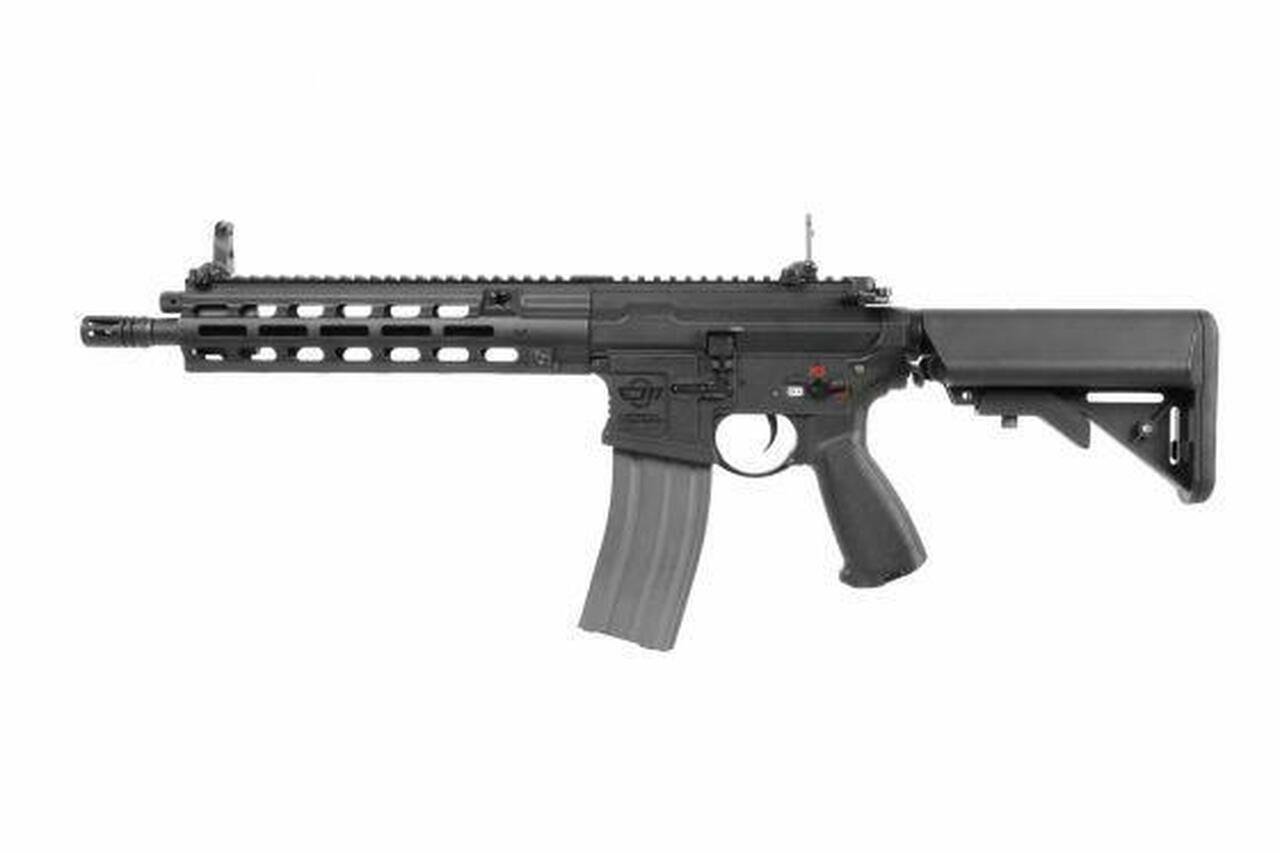 Released in 2021, this CMF-16 AEG is a renewed version of an older model. However, it still ships with similar features, such as a retractable crane stock, M-LOK rails, and an identical magazine capacity of 450 BBs.

The receiver and handguard are made of durable polymer for reduced weight, allowing users to tote it around effortlessly. It still feels like an authentic rifle regardless of the material.

Unlike the older weapon, this one has more ambidextrous features, so left-handed users can instantly pick it up and start shooting. These parts include the magazine release, bolt release, bolt lock, and fire selector. The bolt lock is also used for adjusting the hop-up.

G&G outdid itself by including its 4th Generation MOSFET. They help ensure a comfortable shooting experience while ensuring each pull feels responsive.

Because some M4 users grip the magwell when shooting, G&G made this component more ergonomic. It’s now a viable option if you don’t have a foregrip.

Some airsoft fans are more concerned with how many BBs are flying at the moment than aiming precisely. Thanks to this G&G CM16 LMG, the designated gunner can now lay down a barrage of BBs at a moment’s notice. This weapon is one of the rarer G&G models, so you’ll find many people staring at it at the venue.

Without the 2,500-round box, this weapon looks like a strange M4, but that’s precisely what it is. You can describe this LMG as an assault rifle modified to take belts, and many of the M4’s controls are present. The fire selector, charging handle, and crane stock are all here.

The handguard has been swapped out for a beefier example, similar to the one on the M249 SAW. However, it has M-LOK side rails for increased customization possibilities.

You also get the famous G&G Version 2 gearbox and ETU MOSFET unit. The latter improves trigger response and even lets you swap the full-auto mode to burst fire, which increases ammunition efficiency.

The charging handle can be pulled back for hop-up adjustments, allowing the use of various BB weights.

G&G has always been hailed as a company that makes reliable products, and that’s in line with the company’s vision that aims to innovate and make products with the best possible quality. To that end, they use precise computer tools in conjunction with their CNC machines.

The brand also frequently listens to user feedback and improves its future models based on that information.

All of the weapons here are long-arms, though G&G’s handguns are also excellent pieces. We’ve included everything from PDWs to LMGs, so you have an option for practically any role and combat range. You can always trust a GnG product to last longer than a typical airsoft gun.