Airsoft guns cater to all ranges of combat, from point-blank to long-range. You wouldn’t bring a handgun to a marksman’s showdown, so sniper rifles became available. Initially, rifles hundreds of years ago tended to have accuracy up to several hundred miles, but modern warfare is different.

Around 200 years ago, bolt-action rifles started coming into prominence. These often didn’t come with scopes but could still hit up to 1,000 yards. When optics technologies became viable, the sharpshooter and sniper roles were born.

While we have a list of more affordable airsoft sniper rifles, this one focuses on slightly costlier options. You’ll only find the best sniper rifles under $300 here.

All of these options are designed for airsoft fans of all levels. Beginners can still operate them with some instruction, but mid-level players will find these superior to cheaper alternatives. These fans will know more about weapon customization, putting tactical rails to good use. They might even swap out some parts according to their preferences, like the buttstock, pistol grip, or cheek pad.

No matter what you pick, you know the rifle has your back when picking off distant targets. 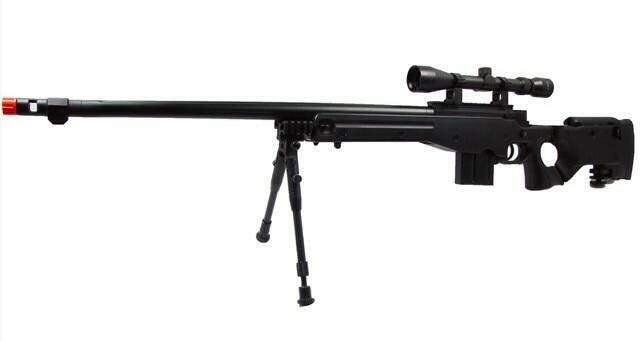 This Well L96 is a faithful copy of the widely-adopted Accuracy International Arctic Warfare sniper rifle. Compared to the actual firearm, it takes a closer look before being able to tell the difference (apart from the orange tip).

This airsoft copy has more modern features than the rifle introduced around 40 years ago. The newer folding stock has an adjustable cheek pad and buttpad, which help shooters achieve proper shouldering. A folding monopod is below the stock and assists with maintaining rifle elevation, as gravity may pull it down and make shooting more tiring.

The handguard is made of the same black polymer as the stock and has a folding bipod mounted at its front end. When combined with the monopod, you’ll find shooting in the prone position much easier. However, if you’re not a fan, you can remove the bipod from the weapon.

You have a 20mm Picatinny rail on top of the bolt for optics and two side rails for small accessories attached to the handguard. You get a scope in the package as well.

When cycling the bolt, you can feel how smooth the action is. This is crucial for quick shooting and comfort as follow-up shots become more manageable.

Although the price tag is under $300, this Well rifle can still compete with premium guns going for twice the price. It comes with all the accessories you need for long-range sniping.

Designed as a lightweight weapon, this Well Airsoft EBR has various features that make running around with it more effortless. It still manages to pump out 420 FPS with 0.20g BBs, which lets you hit enemies from farther away. As a thoroughly modern rifle, it’s more than capable of dominating the battlefield.

The skeletal stock has a cheek rest on it, and you can adjust it and the buttplate. For easier transportation, you can even fold the stock to the left. It snaps back into position in a moment, allowing for speedy deployment.

You also get an ergonomic pistol grip for shooting, perfect for those used to assault rifles.

Instead of a short top rail, you have a full-length rail that extends from the bolt to the quad RIS handguard. There’s enough room to mount two telescopic sights too.

The handguard isn’t just a quad RIS unit, but it’s a free-floating design. It lets the barrel maintain zero, increasing accuracy. Attached to the bottom rail is a detachable bipod, adding to stability.

The detachable magazine also holds 35 rounds. By carrying several of these on your person, you can keep shooting without manually reloading each BB.

Well Airsoft is known for affordable but complete weapons, and this example is no exception. For less than $300, you get a complete sniping package that shoots like a dream. With practice, you can even outgun snipers with better weapons.

ARES Airsoft manufactures the Amoeba AS-01 Striker sniper rifle. While it may not look too impressive to the uninitiated, the barebones appearance only serves to make a formidable weapon seem standard. After using it, users have appreciated its efficiency and unique features.

The Ameoba AS-01 Striker comes with a two-piece stock and handguard. You can swap the parts out for different color combinations too. The design is a simple semi-grip stock that has served snipers for more than 100 years.

Unlike many other bolt-action rifles, this one has a short-pull bolt unit. It has a heavier pull for more vital shots, but the short distance offsets the effort immensely. With practice, you can shoot much faster than other bolt guns.

A 20mm Picatinny rail is fitted on top of the rifle, but the package doesn’t include a telescopic sight by default. Therefore, you can attach your favorite sights to it.

You also get a large 45-round detachable magazine. Shoot more and reload less on the battlefield, as every second you spend shooting can save lives.

ARES Airsoft’s basic weapons may be more expensive than some competitors, but $300 is actually an affordable price tag for this AS-01 Striker. It’s a weapon that bridges mid-level and high-level sniper rifles, and its short-pull bolt is a wonderful piece of machinery for a low price.

Taking on enemies from afar with this Well MB08 Sniper Rifle makes shooters feel like they’re in a shooting gallery. Based on the British L96 sniper rifle, this airsoft gun has some new upgrades that help it fit into the modern battlefield.

For blending into desert environments, this rifle has a tan folding stock. The other parts are primarily black, such as the buttplate, barrel, and bolt assembly.

Find the perfect fit for your frame by adjusting the rubber plate and cheek rest. They’re designed to let users of all sizes achieve a firm grip on the rifle. Prone shooting is made even better with the folding monopod under the stock.

Well includes a 3-9×40 scope and its mounting rings in the package so snipers can assemble the rifle and get to shooting right away. It fits the 20mm Picatinny rail snugly, but you can also replace it with other compatible optics.

Snipers can hit targets precisely at long range by laying down on a flat surface and deploying the detachable bipod. The full-metal barrel helps BBs fly straighter, so accounting for bullet drop isn’t too bad.

All of these upgrades on an airsoft sniper rifle should cost more than $300, but they still hold up well to more expensive guns. That’s Well Airsoft’s goal – an affordable weapon with all required accessories.

Airsoft sniping is quite different from real-life combat, as the snipers are still in the range of AEGs. Thus, having a lighter rifle helps you get out of a compromised spot sooner. This Well MB4410 sniper rifle satisfies the need for such a weapon.

Portability is the name of this sniper rifle’s game, and to that end, Well gave it a folding stock that comes with an adjustable buttpad and cheek rest. These components will make shooting more comfortable, especially with proper settings.

The ergonomic pistol grip also helps you maintain a firm grip and reduce motion while aiming.

You get a 4-16x50mm illuminated scope for extra visibility, especially when the location isn’t brightly-lit. It’s attached to a Picatinny rail on top of the bolt assembly. Even the scope itself has several rails.

That’s not the only tactical rail, as the handguard has four more Picatinny rails for any accessory you can dream of attaching. There’s a folding metal bipod attached to the bottom rail by default, while the side rails are free for lights and lasers.

As you move from point to point, this sniper rifle will provide the cover your teammates need as they advance.

Since this Well MB4410 isn’t too expensive, you can afford to spend more on high-quality accessories. These will help your $300 gun feel like a $600 platform. Sometimes, a lower price tag is an opportunity for customization, even if this one comes with several add-ons already.

For an overwhelming majority of airsoft weapons, the stock springs and other parts don’t perform up to the standards of demanding players. That’s why airsoft upgrades exist, and you can see customized weapons in the hands of experienced airsoft athletes.

These rifles have more upgrade options when compared to the cheaper rifles available. You can swap the springs out for increased muzzle velocity or modify the hop-up and influence the BB’s flight path. The possibilities are endless.

Sniping is heavily dependent on your weapon’s quality, and you’ll often notice how costlier rifles tend to surpass a low-level sniper rifle. These mid-level guns are the bridge between better gear and beginner options.

However, even after gaining more experience, they’re still dangerous in the right hands. You can relegate them to backup weapon status after procuring a better sniper rifle, as it’s not the best idea to only have one.

The five rifles on our list mostly come with telescopic sights except for the Amoeba AS-01 Strike. Stock scopes are functional, but you may consider mounting a better one onto the rail. It’s also an excellent choice to change scopes for different crosshairs, as not everyone likes the typical pattern.