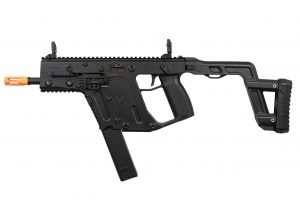 Product Description: The Krytac Kriss Vector is the super-hyped, beautiful, futuristic looking gun reminiscent of games like Call of Duty, The Division, and Splinter Cell, with etched and printed logos prominently featured on the rifle. It feels powerful in your hands, and you will feel the real power when you switch it to automatic fire mode.

This rifle has all the bells and whistles you would expect from a Krytac: a digital trigger and fire selector thanks to the digital MOSFET technology; a dual aperture on the rear sight and folding/lock-in stock, both of which make this gun ideal for both long-range and CQB firefights, a numbered hop-up dial, easily swappable rails – we could go on and on, and will, later in the article. The one thing you will find when you use this rifle for the first time, is that everything just feels right. While the Kriss Vector has a futuristic design, when you lock and load this gun, everything clicks and falls into place like it should. There are only a few cons to this rifle: its price (at $450 USD, it is not cheap), and its small battery compartment located in the pistol grip. However, you get what you pay for, and when you use the Krytac Kriss Vector, you feel like you got your money’s worth.

Krytac is the new kid on the airsoft block, and they do not disappoint. Their LVOA and Trident guns were both well-received by the industry. The Krytac Kriss Vector has been hyped up and awaited by the airsoft community for a long time. Part of the attraction and charm of the Krytac Kriss Vector is that it is actually made by Kriss, the manufacturer of the actual Vector. That’s right – Krytac is the simulation division of Kriss, and Kriss makes the futuristic, space-age looking gun that is featured in so many video games. Tom Clancy’s line of video games was a particular fan of the Kriss Vector, featuring it in just about all of its games – from Splinter Cell to The Division to Rainbow Six Siege. Even Call of Duty has featured this gun in their games.
Just like the actual Vector, the gun has the exact dimensions as its firearm counterpart, and just 100 grams short of the real Vector’s 2.7kg weight.

So, let’s get off the hype train, and down to brass tacks.

Krytac’s Kriss Vector is equipped with digital MOSFET and an all-custom, ambidextrous 8mm mechbox. The rifle features a battery disconnect, disconnecting the battery from the digital MOSFET when the safety is switched on. The hop-up is built with a rotary, numbered switch. The battery is located in the pistol grip, which is cramped, and Krytac says it will take up to a 11.1 LiPo battery that is 116m or less, but we had to order a shorter custom 11.1 LiPo battery to fit for the chronograph.

You will see why this gun carries a $450 price tag when you see the externals. The rifle’s aesthetics are absolutely gorgeous. This airsoft gun feels amazing in your hands. It feels powerful. The pistol grip feels amazing, with etched lines on the front and back, and rubber grips on the sides. Every external piece on this gun – from the stock to the fire selector – lock into place with a satisfying click.

The Vector is mostly polymer with all-metal hardware. Despite being made with polymer, the gun feels solid and well-made with no “play”. It comes with upper rails and lower rails attached, with a side rail panel included. The magazines are SMG mags, so they won’t fit into typical mag pouches but should fit into pistol pouches. They are pointed and click and lock into place when loaded. The mags feel good and natural to load, but a little awkward to eject. We’ll get into more of that later in the CONS section. The fire selector is easy to switch, and is separate from the safety switch, witch is a little harder to switch on and off, as the safety actually connects to the spring and de-cocks the gun.

Here is where the Vector really shines. The Vector is so intuitive and well-made that it feels like a natural extension of your arm. With the Vector in fully automatic mode, you feel unstoppable with this PDW, and I couldn’t shake feeling like a special forces soldier with this gun. Shooting targets on semi-automatic was effortless, and incredibly consistent, and I felt like a marksman shooting this baby. The fact that Krytac’s Vector looks and feels identical to the Kriss Vector firearm doesn’t hurt.

When placed on the chronograph, the Vector shoots at 17RPS and 420FPS with a shorter 11.1v LiPo battery. The iron sights, like everything else with the Vector, are surprisingly intuitive, and you will notice that you don’t need to hunch when lining up your shot. The trigger feels good, but with the MOSFET and the 2-round burst, we did notice a few half-pulls.

While Krytac’s Kriss Vector is a pleasure to hold and a dream to shoot, it does come with its drawbacks. One of the biggest is the price tag.

The battery is located inside the pistol grip, so the battery space is cramped.

The trigger, despite being electronic, is hard to pull. After playing for a few hours, your trigger finger will get sore and tired.

The sling point is also awkwardly placed on the bottom of the stock. When we were carrying it to the field, we found the gun flopping upside down.

Krytac’s Kriss Vector is a great and beautiful looking gun, but for the $450 USD price tag, you’re basically paying an extra $100-150 for the aesthetics. You could buy an ASG CZ Scorpion EVO, a similar gun with similar performance (but aesthetics that are not pretty), for $100+ less, or you could buy a lower end M4 such as the G&G M4 Combat Machine Raider 16 and upgrade it to the nines for the same price.

Despite the price tag, we will say, if you have the money to spend on this gem, you will absolutely not regret it. It just looks and feels right, and when you hold this gun and see the externals and aesthetics, you will immediately understand why it costs what it does. There are not a lot of guns out there that look identical to their firearm counterparts; much less that are actually manufactured by their firearm counterpart manufacturers. This baby is fully licensed and authorized by Kriss. They have a proven track record for their firearms, especially for the Vector, so if anyone knows how to make a Vector, it’s Krytac. If you want to feel the power of this gun in your hands, the performance that comes with it, and the consistency of the Krytac, and have the budget to buy it, walk, don’t run, to your computer or phone and purchase it ASAP.