Lancer Tactical is a household name in airsoft circles, as they manufacture affordable yet excellent airsoft weapons. Their Gen 2 and Gen 3 weapons have served many fans well, though Gen 1 is somewhat out-of-date. Nevertheless, you won’t be alone thinking how hard it is to pick one.

Fortunately for you, we’ve gathered some of the best Lancer Tactical guns you can find here. Read on to find out more about them. 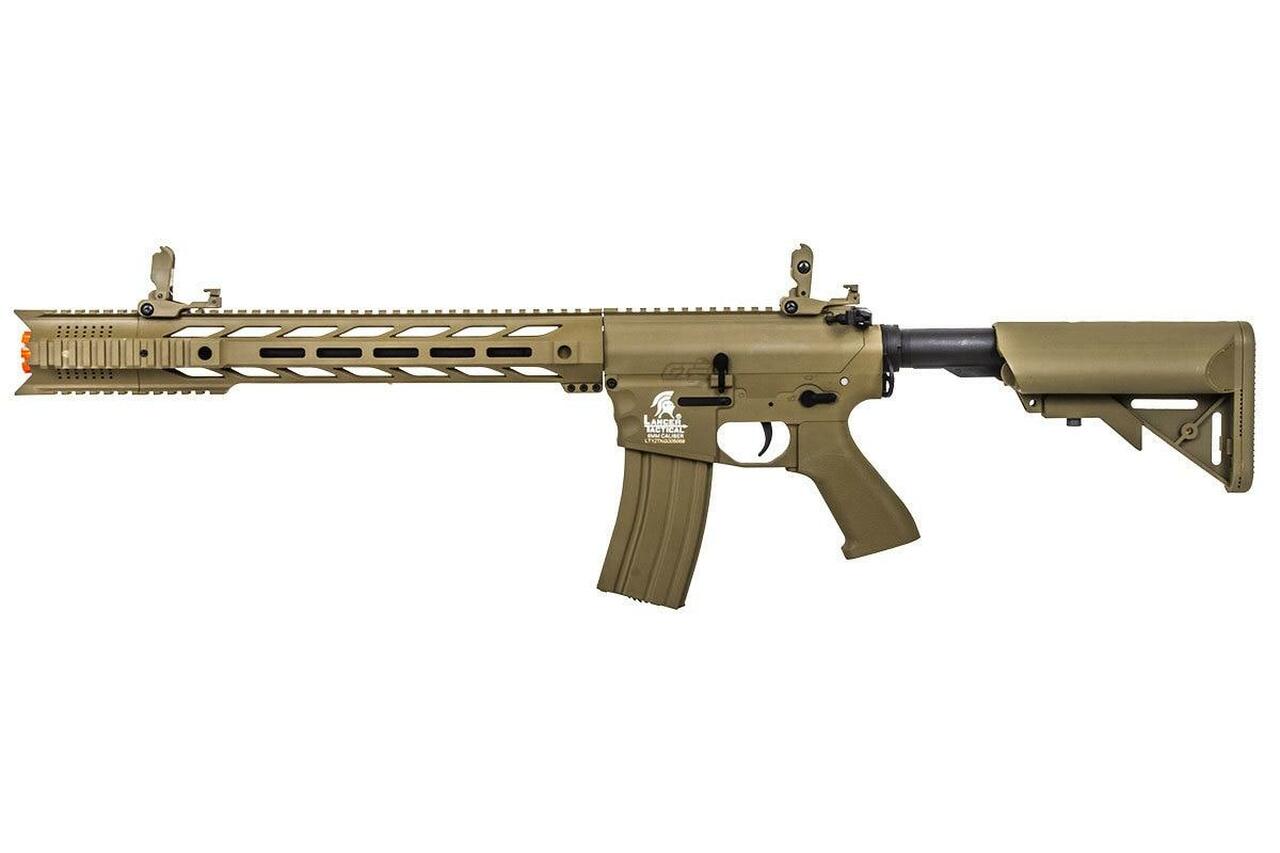 One of Lancer Tactical’s most famous designs is this Interceptor SPR Airsoft Rifle. This example is part of Gen 2 and comes in flat dark earth color. It promises excellent performance out of the box while allowing users to upgrade and customize the rifle to their preferences.

The Interceptor SPR has a distinctive muzzle device that doubles as a tactical rail extender. These rails are Picatinny and measure about 2 inches. However, the weapon has M-LOK rails on the handguard, though as per industry standard, the top rail is still Picatinny.

These rails are compatible with many standard accessories, such as red dot scopes, flashlights, PEQ boxes, etc. Even accessories designed for firearms will work flawlessly.

This rifle comes with Lancer Tactical’s Gen 2 gearboxes, which are easy to upgrade. There’s also a quick spring change system for arenas that require lower FPS.

Due to the M4 design, the Interceptor comes with a telescopic stock. It also houses the spring change system.

Silenced weapons don’t truly exist in airsoft, as suppressors are virtually worthless for AEGs. Nevertheless, many fans love the aesthetic, and Lancer Tactical is only happy to oblige. This M4 SD is another Gen 2 rifle and doesn’t have any of the Gen 3 upgrades the company introduced later.

Nevertheless, this rifle is a lovely one. The pure black furniture is only contrasted by the orange tip and some white markings denoting Lancer Tactical’s handiwork. Everything is either black polymer or painted metal.

The frame is mainly reinforced polymer, while the barrel is made of metal for accuracy. With extensive polymer use, the weapon is lighter than some real-world counterparts.

The M4 SD carbine comes with a Gen 2 gearbox designed for easy upgrades and modifications. The motor has 8mm ball bearings, which produce less friction. You’ll notice the difference in longevity when compared to older models.

There’s a telescoping stock attached to the gun for better CQC, where the quick change spring system is also located.

With the advent of Lancer Tactical Gen 3 products, the company started incorporating better features in its rifles. This Gen 3 Keymod M4 EVO AEG has all of those and a few extras.

Lancer Tactical gave this model a Keymod handguard, including diagonal slots for backup iron sights or scopes. The bottom and top rails remain Picatinny for stability and accessibility.

The top rail is seamlessly linked to the upper receiver’s rail, creating a perfect length of Picatinny mounting points.

The most significant upgrade is the MOSFET electronic trigger from Zion Arms. It’s fully programmable and allows for unique firing configurations. Combined with the new trigger, the rifle can shoot however you want it to, even in bursts.

Unlike Gen 2 rifles, this M4 EVO uses a Deans connector, saving space and allowing higher capacity batteries. You’ll need an 11.1v battery, though the gun doesn’t come with one as part of the company’s new decisions. Users are free to use any high-quality products instead of the included products that come out of the box.

The parts that received the gray paint are the handguard, upper receiver, and lower receiver. However, some smaller components, such as the fire selector and trigger, remain black.

With the Keymod handguard, users can mount accessories diagonally, allowing for new possibilities usually impossible with quad rails. Nevertheless, this handguard is partially a quad rail design. The top rail is entirely Picatinny, however.

You can use the included flip-up iron sights to hit targets farther away, but they’re not the best for close-quarters combat. Thus, it’s best to attach optics designed for CQC, such as reflex and red dot scopes. You can even add magnifiers, so the scopes work at longer distances.

The Gen 3 rifles all have an ergonomic magazine well. There are also grooves to accommodate users who prefer that grip instead of the handguard or an attached foregrip.

Most operators know that carbines can work in CQC situations, but they’re not the best option. Special forces teams have chosen to carry SMGs for very narrow spaces, but some still want a rifle. Enter the SBR, and this Lancer Tactical M-LOK 7” M4 is a perfect example.

This rifle’s barrel only measures 7 inches, making it barely longer than an MP5 or other machine gun. Nevertheless, it has the same mechanics as an M4, allowing fans familiar with the platform to transition effortlessly.

Instead of a Keymod handguard, this weapon has an M-LOK handguard, allowing for diagonal accessory mounting. However, you’ll need different mounts and adapters to make it work.

The top rail is Picatinny and links to the upper receiver rail seamlessly. While two flip-up iron sights come with it, they don’t interfere with your red dot sights. They can even work with some optics.

One unique feature of the magazine is the window to check your ammunition. The baseplate is also upgraded for faster reloads.

Not every airsoft fan can afford a premium weapon, which is where Lancer Tactical comes in. The company’s products can compete with other manufacturers’ higher price point weaponry without being too far behind. Check these out if you’re looking for a new airsoft gun.