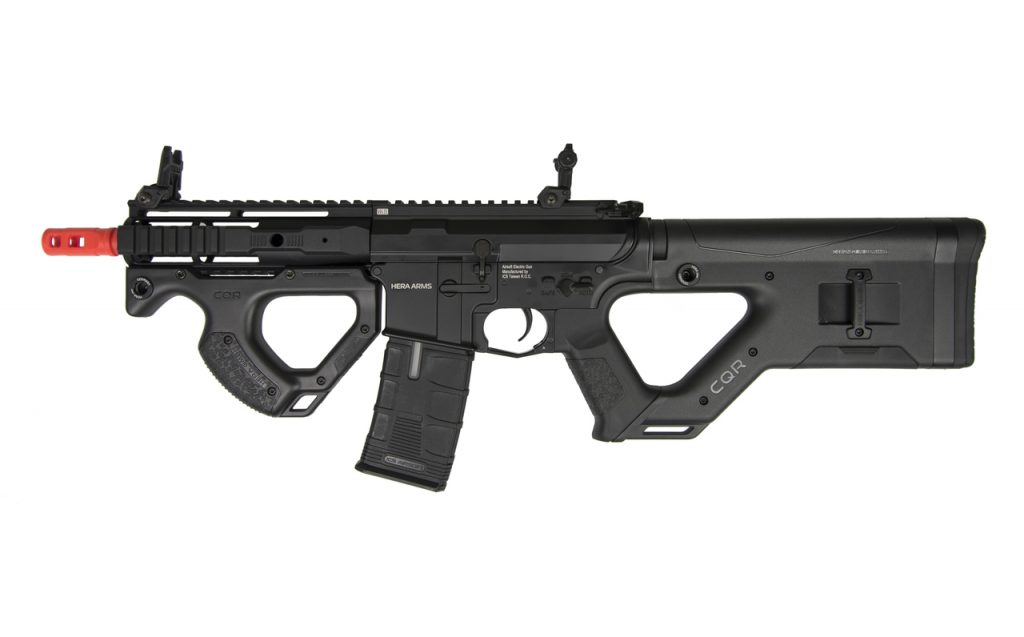 Product Description: The collaboration between HERA Arms, ICS, and ASG bring this lifelike replica of HERA’s The 15th 01570 to CQB airsoft battles. This rifle’s laser precision alongside its innovative ergonomic design make this a real beauty to behold and shoot with. High-quality, all-metal build with polymer stock and magazine make this a hefty but comfortable rifle to use.

The ASG HERA CQR is an innovative airsoft rifle that features excellent performance and ergonomics. The mostly metal externals add to the weight distribution, sturdiness, and overall gun feel, while the reliable internals can be easily accessed. What’s more, state-of-the-art self-diagnostics have been built into the rifle’s systems itself. The gun shoots incredibly accurately at ranges appropriate for a CQB, and the generous magazine size will allow you to get an edge over your opponents. This rifle is one of the best top-end airsoft weapons, and it shows in its build quality and performance.

The stock doesn’t feel good on the wrist at first and requires a period of adjustment; the stock magazine can misfeed and doesn’t fit that well; price is somewhat high for a beginner

The ASG HERA CQR is a replica of a real-life rifle commonly used by police forces, and it is truly an innovative piece of airsoft technology. The externals are mostly made of metal, adding to the rifle’s weight, making it a whopping seven pounds when loaded – on par with the original gun. The ergonomically designed front grip and stock are something that you will need to get used to, but I experienced only minor problems adjusting to their unusual shapes. You might not like their geometry visually, but over time, I’ve noticed that the stock helps you aim a lot better than at first glance.

The gun comes with a four-sided Picatinny rail running alongside the short barrel, with a full-length top rail. The bottom rail, by default, is outfitted with the ergonomic handle. The rifle also comes with its own sights, which are nothing to scoff at and greatly aid aiming at a longer range. It also has eight different places to mount your favorite sling.

The internals of the ASG HERA CQR are something else entirely. The gun’s base is a fully upgradable version two gearbox. In fact, this is ICS’s famous split gearbox with inline MOSFET. The gearbox is incredibly easy to disassemble for repairs or upgrades. The high-powered M120 spring system and steel bushings provide plenty of internal power but are also durable to the extreme, making the CQR a trustworthy and reliable model you can use for years.

The gun also has a few more exciting features up its sleeve. The programmable fire rate system can switch between single and three-round burst mode, alongside fully automatic fire rate support. The rifle has a self-diagnostic system that will notify you of any errors via a multitude of LED lights in the gun.

The gun can pre-cock the trigger when it powers on, making the trigger distance shorter and ensuring faster response times for the first few bullets fired. This is especially useful for competitive matches and gameplay.

Performance-wise, the ASG HERA CQR is no slacker. It is rated for 360 FPS with .2g BBs, which is slightly higher than CQB limits. However, I’ve found that the rifle settles down to 340 FPS fairly quickly, making it suitable for battles more-or-less out of the box if you’ve fired some test rounds. The gun fires at a respectable 20 rounds per second in its fully automatic mode.

Taking it out on the firing range, the CQR has no problem reaching 50, 75, and 95 feet with almost laser precision. The gun has extremely crisp gear rotation and doesn’t feel overbearing at all to use. Granted, the buttstock was slightly awkward at first, but it felt pretty comfortable after I’ve had some time to adjust. The gun is sturdy and robust, and the metal adds much-needed weight that is balanced appropriately to ensure for a good aim.

The rifle is relatively short, making it extremely maneuverable in enclosed spaces, but the shape of the buttstock and grip might be a bit awkward on your wrist while you’re not aiming with it. Overall, the ASG HERA CQR rifle is designed to excel in competitive airsoft CQB, and won’t disappoint you in the field.

The ASG HERA CQR is quite unique. In fact, the first thing you notice are the heavily geometric buttstock and front grip. Between the two, the gun feels comfortable to use after a while, and you will feel the stock guiding your aim somewhat as you get used to the gun.

The gun’s externals are top-notch. Made mostly of metal, they allow the rifle to be sturdy, versatile, and endure years of punishment.

The internals run flawlessly but are also very easy to reach, disassemble, clean, repair, or upgrade. The CQR is a well-built machine on its own, but if you’re experienced, you can very easily take it up a notch with a more customized internal mechanism of choice.

The gun’s performance at close range makes it perfect for CQB matches, and the trigger system and wide selection of firing modes will adapt to your needs and preferences. The pre-cocking feature gives you greater accuracy for the gun’s initial burst, giving you a much-needed edge in professional combat.

The CQR also comes with plenty of customization options between its two side Picatinny rails and full-length top rails and detachable iron sights. The addition of the self-diagnostics module can be a godsend when you’re trying to figure out why the rifle won’t fire. 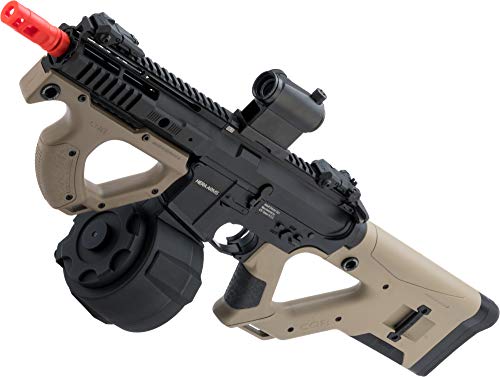 There are only a few cons where the ASG HERA CQR is concerned.

The main sore point was literally a sore point on the wrist when the gun was handled. While not aiming, the highly angular buttstock and grip can feel uncomfortable and you’ll need to find a perfect spot to rest the gun on. This problem doesn’t persist while aiming, so it won’t affect your actual shooting performance, but holding the gun for a long period might cause some discomfort.

The stock magazine the gun came with isn’t very high-quality. I’ve had it misfeed a few times while testing the CQR out and would honestly recommend purchasing a better replacement for the magazine. It also feels quite flimsy compared to the rest of the rifle.

The gun is rated for FPS slightly higher than the CQB limit. The initial firepower of 360 FPS will settle down to 340s relatively soon, but you need to keep in mind that you have to take the rifle for a spin before using it in close quarters.

Word on the Field

The ASG HERA CQR is rated as one of the top-notch performers in its class. Most users have replaced their other models with the CQR and are quite happy with the purchase after the initial adjustment period for the somewhat awkward stock. The gun mirrors the original, so fans of the real firearm won’t be disappointed by its visuals and plenty of references and markings on the exterior.

The ASG HERA CQR rifle is a high-quality CQB-rated weapon aimed at professional play. The gun’s superior external and internal build makes it a joy to use and shoot with. Plus, the robust metal parts will ensure the rifle lasts for a long time.

The gun’s top-notch performance excuses its somewhat poor magazine and an initially unwieldy stock. You will need a small amount of time to get used to the rifle’s ergonomics and to lower its FPS down to allowed levels.