For our criteria for beginner and budget-friendly airsoft rifles, we are taking several factors into consideration. The first is the value: as a beginner, you’re probably looking to get the most bang for your buck (literally) as possible. But where some other “best beginner airsoft guns” lists detract from ours is durability. As an entry level player, you want a cheaper gun, but not one that is going to break or malfunction in your first few plays when you don’t even know anything about fixing them. There is no easier way to get frustrated with this sport than to buy cheap guns and gear and have to worry about your gear breaking in the middle of a match.

This is an article about the best budget guns for airsoft beginners looking to play in regulation airsoft matches, leagues, or pick-up games at airsoft fields. We also have a list of the best cheap airsoft guns for plinking, backyard play, and casual shooting.

Check Out Our Recommended Guns Below, Or Scroll Down To Learn More About Choosing The Right Gun. 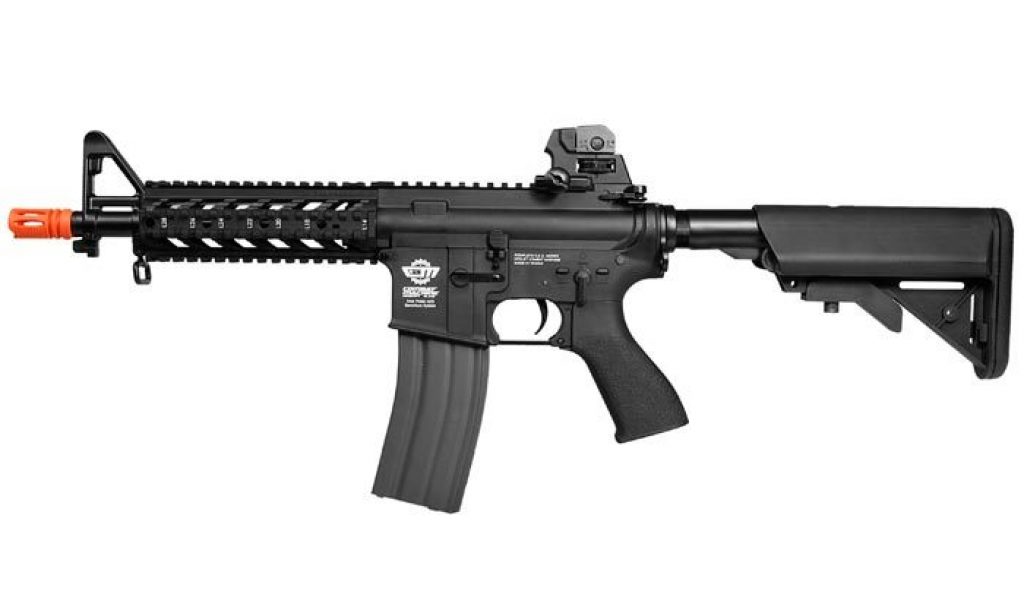 No surprise here. The G&G Combat Machine 16 Raider is on everyone’s beginner recommendations list, and for good reason. This AEG M4 model is one of the best-value rifles on the market, and for $150, you can compete with players that have spent hundreds of dollars more on their rifle. It’s a light rifle yet very durable, made with hard plastic, and will take the inevitable beating that a beginner will give it when figuring out how to use and maintain an airsoft gun. Those two qualities – light and durable – are extremely important for beginners, who are still learning how to handle their gun.

The internals are great for the price, and it features a 450-round magazine for those new players that tend to “spray and pray” when they are first getting into the game. The CQB version of the gun (close-quarters battle) is even lighter and more agile, and is perfect for indoor play, where a player can really learn the fundamentals of the game and marksmanship.

The CM16 is very upgradable and is Tokyo Marui compatible, so as you put more time and money into the sport, and learn what kind of mods you like, this rifle is ready and willing to upgrade to your playstyle.

One of the few downsides to this rifle is that it tends to fly off the shelves. It is one of if not the highest selling rifle on the market, even in 2019.

For a little bit more money (or significantly less, if it’s on sale, which it often is), the ICS M4 Sportline is an upgrade on the middle of the pack entry level M4s.

The ICS M4/M4A1 Sportline is ICS’ mass-produced entry level rifle. Like the others on the list, it is a mostly polymer build, but with some benefits that ICS offers that the others can’t. The M4 Sportline has ICS’ typical split gearbox, which is so much a point on the “plus” column for beginner players that it can’t be overstated. It makes repairs, upgrades, and switching out the spring for CQB or outdoor play an absolute breeze. The rifle pops open right at the back of the lower receiver, and you can hold the upper receiver in your hand in a matter of seconds. Checking the air seal or replacing the rifle can even be done on the fly. And beginner players who are not otherwise natural tinkerers would probably need to hand their guns to their more experienced friends or field staff for examination or repair if they are using a gun without a split gearbox. The charging handle also pulls back with ease if you want to adjust the ICS rotary hop-up at home or on the fly.

The trigger response for semi-auto is crisp, the rate of fire for automatic is impressive, and the ICS M4 Sportline shoots at between 350-370 FPS with 0.20g BBs, so if you’re using 0.25 BBs, which you probably should, you should be shooting near the upper limit of CQB play, and powerful enough to play outdoors. And if not, the spring is just a quick change away.

If you catch this gun on sale, or you’re looking to shell out a few extra bucks for a beginner gun that is more reliable and easy and convenient to manage, you can rest knowing you made a fantastic investment in the ICS M4 Sportline. ICS is known for quality products, so having an entry-level ICS M4 is some added assurance. Plus, it’s known for being compatible with just about any M4 magazine on the market.

Finally, we have a rifle that isn’t an M4! If there is one thing that you’ll hear about the CYMA CM series AK, it’s that it’s a tank. It’s easily one of the most durable guns for under $300 that I’ve ever seen. When you’re a new player, this is probably the #1 factor in a gun. This AK can take a beating, with both its externals (rough handling and bashing), and internals (“newbie maintenance”), that are rock-solid, just like the real AK. Every player I have talked to with a CYMA AK says that their gun has lasted for years. It’s not uncommon for this rifle to perform for you for 3+ years without issue.

The CYMA is known for their awesome and affordable AK-47 and AK-74 rifles that are VFC or Tokyo Marui clones – this means that they are basically copies of higher-tier guns; clones allow newer players with lower budgets to have good guns for an affordable price.

For under $200, the CYMA AK comes with real AK build materials (full-metal receiver and rails, real wood furniture), a very high capacity magazine (usually between 400-600, depending on the model) which is great for players just starting out who tend to “spray and pray”, Tokyo Marui compatibility, and it’s fully upgradeable.

The internals are really decent for a budget rifle. I have heard from a few players that the rifle might need some lubrication out of the box to perform its best, but others have said that their AK fired like a beast right out of the box. If you’re just starting out, you can’t go wrong with CYMA’s CM-series AK. 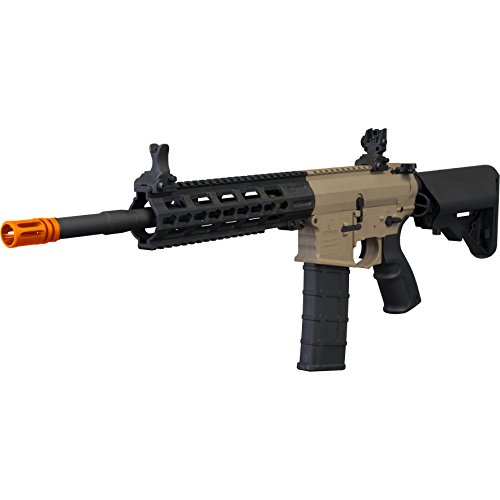 Tippmann makes good, mass-market entry level guns for both paintball and airsoft. Just like the Tippmann 98 custom paintball gun that was everyone’s first decent, affordable, and customizable paintball gun for years, the Tippmann Commando is their airsoft equivalent. If you’re looking at the G&G Combat Machine 16 Raider, and it’s out of stock or too heavy, check out the Tippmann Commando. Being called the next G&G CM16 Raider of entry level guns by airsoft players and reviewers alike, Tippmann has earned its spot on our list. It’s a full polymer M4 like most good entry level rifles. It’s extremely lightweight but very solid with well made polymer and nylon fiber materials and comes with waffle magazines. At just 4.4 pounds (2 kg), the Tippmann Commando makes a perfect first rifle for beginners and younger players who are either not used to or are not strong enough to quickly acquire targets with a heavier gun.

The Commando has several features which are a pleasant surprise to find on a entry level gun at its price. It has flip-up iron sights with an unlock button, so your sights won’t be falling down on you at the worst possible time. The rear aperature sight is adjustable, and the Commando comes with an included sling mount. 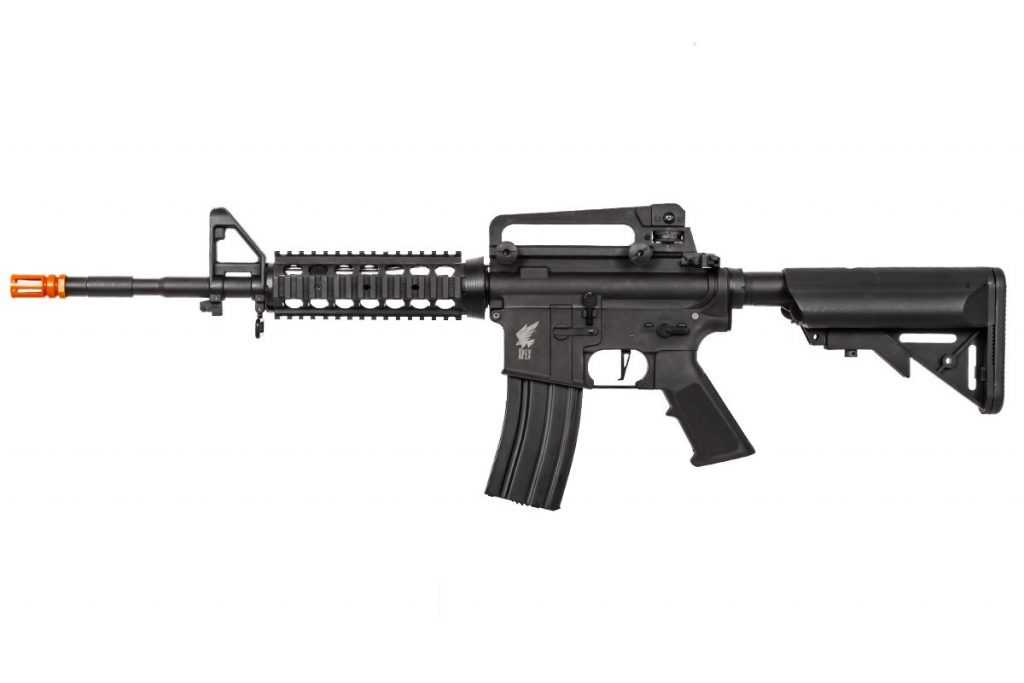 The Apex Fast Attack, OEM’d by Classic Army, is another mostly nylon fiber-reinforced polymer M4 entry level rifle platform. The Fast Attack is a bargain of a beginner gun, significantly cheaper than the others on this list at just under $100 – this is arguably the best beginner rifle you’ll find for under $100. It boasts a Classic Army 25K motor, 6.03 tight bore barrel, and shoots 370-380 FPS right out of the box.

If price is really a concern for your entry level airsoft gun, this is probably one of the few, if only, entry level M4s out there that have decent performance and reliability at the double-digit price margin. Other than the Apex Fast Attack, for that price on an entry level rifle, really the only other option you’re going to have are Lancer Tactical M4s that aren’t known for their reliability or resilience, and the Apex Fast Attack is a much better option.

I tried the Apex Fast Attack right out of the box, without any hop-up tuning or anything, and I was able to hit a very tight grouping 50 feet away and chronographed at between 370 and 380 FPS. The Apex Fast Attack has a little lower rate of fire than I’m used to, but that is a very acceptable sacrifice to keep this rifle so affordable.